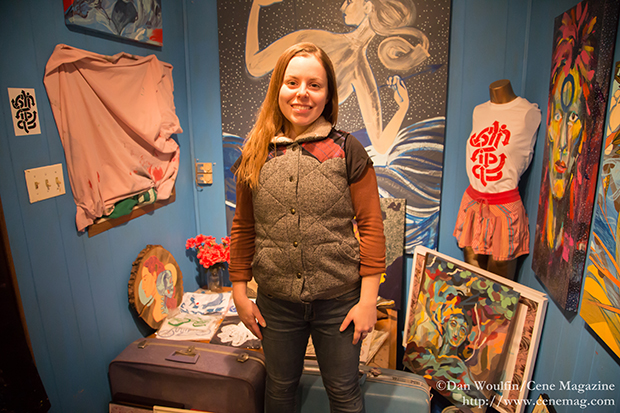 I first met Angela Newman (a.k.a. Anjipan) at the now defunct “What is that though? Art Show.” I remember wondering if I was in the right place, finding the door with a sign, and going up the stairs. The transformation from a nondescript warehouse in Bohemia to the bright blue walls of her studio was like walking through a portal. Since then, I’ve been inspired by her willingness to open her studio, create community, and push the boundaries of her painting techniques. So I decided to visit and ask a few questions…

CENE: When did you start drawing/painting professionally?
Anjipan: Being the type of artist who has self-assigned the majority of her of work, it’s hard to pinpoint just exactly where, by definition, ‘professionalism’ begins and ends. Creating work and honing my skill has been my most immediate focus even before I had finished high school (Connetquot, class of 2008). I’ve been producing work and printed material consistently since then but was not able to build relationships with clients until about five years ago. At the start, commissions would be few and far between and I’d have to invest some serious legwork in order to sell personal pieces. Within the past two years, commissions have really picked up and I’ve built a solid foundation of people who like what I do. The quality of my work is also improving with age and I’ve gained valuable experience, which now allows me to manage my time more efficiently. I have yet to make the leap to being exclusively employed by my artwork and I always keep flexible side jobs so that I can actualize a budget. Being a full-time Professional painter is becoming more near to me each day- but for now I’m what I’ve been my whole life, an active artist.

C: Are you trained?
A: I have been drawing/crafting my entire life. My parents realized that and facilitated my drive. I had a phenomenal group of art teachers throughout public school who aided greatly in growing my confidence to pursue art as a career. I learn a lot on my own from observation and borderline obsessive amounts of practice. I feel I’m still miles and miles away from the level of skill I can see for myself in my head (which is a moving target by the way).

C: What are your influences?
A: I’ve always loved symbolism in art and literature and I’ll often use existing symbols or reassign symbols in my work in order to build my own language. The process itself or the logistics of making a composition work can also end up being responsible for the final outcome of a piece.

I look at other artists’ work all the time and at the world around me with an artistic eye. I read books and listen to music and sometimes a line or a lyric will jump at me with above average significance and I’ll be inspired to sketch. The sketch won’t necessarily be to illustrate what was read/heard, it’s to illustrate my interpretation or a combination of that information and something I’ve experienced in life. 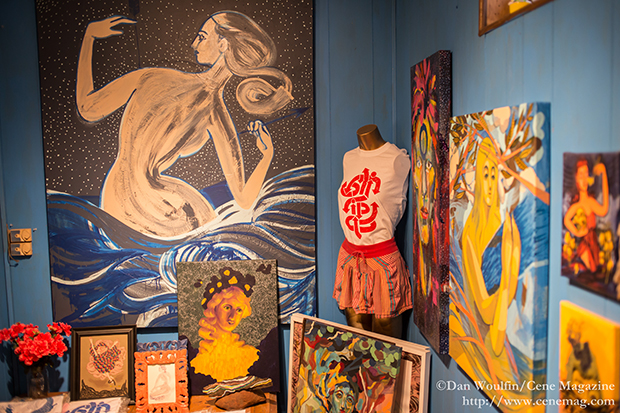 C: When was your first show?
A: My first solo show was at Toast Coffeehouse in Port Jefferson, NY in September of 2012. It was very important to me that the pieces were cohesive and that I showed the best of what I could do at the time. I decided to make all new work, which adhered to uniform subject matter and color pallet. I ended up making over seventy pieces (mostly on paper) all in the month preceding the exhibit. I learned so many valuable lessons concerning process, execution, presentation and promotion thanks to that show. Other opportunities rapidly flooded in after that debut, along with a natural desire to produce more polished work.

C: What was the “What is that though? Art Show” Who/what inspired it? How did running a DIY art event help your development?
A: The “What is that though? Art Show” was a monthly pop-up show that I hosted in my former studio space for nearly three years. It was a place for artists of varying skill levels to show work and share thoughts. There was also an “open mic” aspect, where musicians and entertainers would perform for a welcoming audience.

What inspired me to start hosting the ‘WITT’ was a show in Manhattan (the All Arts Show) that I had been attending the year before. The girl who ran it is only a few years older than I, and seemed sort of shy like I was. I was able to put myself in her shoes and out of my known comfort zone. People responded so well so quickly. I found that I was soon able to step back from feeling like I was in any kind of spotlight, which allowed me to become one with the congregation while the event maintained itself.

Obviously, there were a ton of behind the scenes hours that went into preparing the studio each month. I liked to have things shifted around and set up new and differently in order to make each event unique. It was my pleasure to put the labor in- I was gaining creative satisfaction from the endeavor but in order to do so I sacrificed a lot of time that would have been spent on personal work. I sold hardly any work around this time so the WITT’s budget came from my pocket.

I learned a lot about what’s actually possible – once each show was in full swing, it felt like a dream. Countless times I was blown away by the creative community and I was deeply moved by beautiful, fleeting moments born right before my eyes. To share the world of the WITT with like-minded and brilliantly creative individuals is something I am so grateful to have been able to experience.

C: How did you get involved in portrait modeling? Would you say it helps you as an artist?
A: Originally, an artist friend of mine who is a watercolor instructor at The Art League of Long Island asked me to fill in last minute for one of her classes. I said yes because I thought it might be exciting to be ‘on the other side’ and also because I like a challenge- to sit completely still for three hours. As I know now, having actually picked up portrait/costume/figure modeling as a source of income, models will sit still for 20-minute intervals with 5-minute breaks between. That first night, I sat like a statue and stared at a decorative plate on the far side of the room for the full three hours, solid.

I can safely say that modeling for these various classes has had an enormously positive impact on my personal work. Although I can’t see what the students’ paintings look like from where I’m sitting, I fundamentally comprehend the advice and guidance the instructors are giving them as they paint. Much of that information is refreshing my memory from what I’d learned in high school- but every so often, an instructor will unlock a new and very important door. I soak it up like a sponge while I sit there, perfectly still. 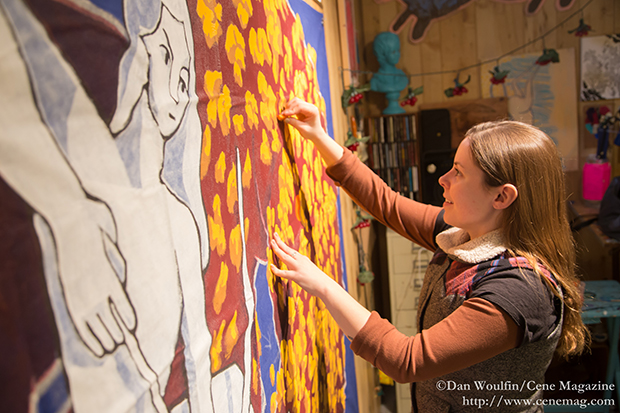 C: What kind of collaborations do you do?
A: If there’s enough time available and if a person is willing to match my effort, I will collaborate with literally anyone. Both parties are always able to learn something by working together on a piece. I love everything about the process, the push and pull, debating and compromising.

There is one artist who I collaborate with on a regular basis, Christopher Heerin. It was fate that we should meet and the first piece we ever did together actually blew us both away. Artists are for the most part, solitary creatures, so to find a person whose style and habits meld effortlessly with your own is rare. We manage to strongly maintain our individual ‘languages’ so that the final result is of two artists’ hands in harmony.

You can see Anjipan’s work in person at Tap and Barrel in Smithtown through the month of March, at Toast in Port Jefferson on Thursday, March 9, and at The Leaky Lifeboat in Seaford on Sunday, March 19 starting at 5PM.

To see more of her work online, go to http://www.anjipan.com/ or https://www.depop.com/anjipan. You can also follow her on Instagram

“Dan Woulfin is a former freelancer for a number of newspapers you probably haven't heard of and a photographer who doesn't like using the viewfinder.  Somehow, once in a while, it seems to work out...”