Your Bookstore Has Coffee? Nice. Mine Has Wine.

And coffee, of course. But the owners of “Turn Of The Corkscrew Books And Wine” have seen the old publishing business come and go, and if they have anything to say about it, they ain’t going out like that.

I love Barcade. Give me a pint and allow me to play vintage arcade games for a while, and a human being will emerge from this place contented and willing to assimilate. Okay, that’s a slight exaggeration. But it’s a win-win for myself and the world. I’m all in, and I’m not the only one.

So, then: why can’t we have nice things? East of the City Boroughs, there is hesitation. When I spoke to a restaurant owner about the idea of doing something like that in Nassau/Suffolk, he winced and shook his head. “Brooklyn,” he said, simply.

The Hybrid Store. Look in the right paces, and you will find laundromats with pinball, video arcades that serve beer, and a yoga studio that also provides cocktails and live music. Locations: Bushwick, New Orleans, Ashville and San Francisco, among others. The new shopkeepers are presenting traditional shops in a non-traditional way. Risk, it would seem, tends to take place on a funky street.

But for Carol Hoenig and Peggy Zieran, they saw risk as a necessity, and they took it on locally. “We knew we had to do things in a different way,” says Carol.

“Turn Of The Corkscrew Books and Wine” opened officially this past October in Rockville Centre. It is a bookstore with a bar. Yes, I did just say that.

Partially inspired by their longtime book club, “Book And A Bottle,” Carol and Peggy raised money for their new business the new-fashioned way: IndieGoGo. They finished funding in a time honored way: they stuck their necks out. Their houses are on the line.

Risk is not something they take lightly. 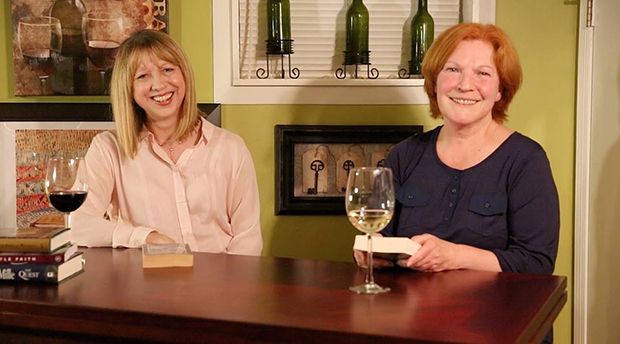 Turn Of The Corkscrew Co-Owners Carol Hoenig and Peggy Zieran

In their favor, they know the publishing business from the inside. Carol and Peggy met working for Borders in 1994. For years, Borders was credited with changing the way people looked at bookstores. The large open spaces, the kids reading and activity area, the music listening stations, the café area…coffee! Food! Today, these are staples, but back in the day, this was innovation on a large scale. Unstated, it was an invitation to stay for a while, in the dark, unthinkable days before wifi.

With so many things to do in one place, the impulse to leave diminishes, and community becomes possible.

Barnes & Noble thought this was a wonderful idea, this bookstore of the future. They soon followed suit in each of these areas, and today they are the only mega book retailer left, partially due to its’ online outreach and Border’s brick and mortar overreach. Carol had become National Events Coordinator, and Peggy went on to run their Syosset store, but Borders could not sustain itself with its’ pre-internet strategy in a post Amazon world. Carol lost her gig with the troubled company, but bounced back in style (see the video below.) Peggy got out before Borders officially went under in 2011, closing the Syosset store and hundreds more around the country.

Rockville Centre had not seen a bookstore since Village Book Shoppe closed its’ doors over five years ago. Even in a solid town, the economy took its’ toll. 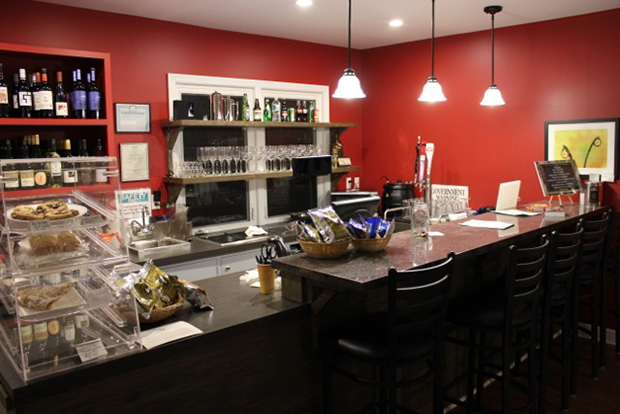 Is it working? In a little over three months, the store has hosted over 50 events, including 20 different book clubs. ”They keep coming,” Carol says. Traditional events such as children’s story time and author events round out the calendar, and fill up the place. Three-time Emmy Award winner Cokie Roberts will be hosted offsite by the store in April. No surprise there. Events, and her own writing, are Carol’s specialty. What’s been a recent challenge? She shakes her head. “Made too much chicken salad. It didn’t keep.” Welcome to the food business.

Hybrid likes to get…hybrid. “What’s up with Paint Night?,” I, the uninitiated and painfully naive, ask. “Serious stuff,” Carol replied. “You need a ticket in advance.” Pwhhhattt? Paint Night, by all indications, is a thing, and not only here. A friend told me she tried to get tickets to one at Salumi Tapas and Wine Bar in Massapequa days before the event. “It sold out. We had to buy tickets for next month,” she says.

Have I even mentioned books yet? Books, kid. Beautiful books, of every size and shape.

And with so many different things to do in one place, the impulse to leave diminishes, and community becomes possible.

Carol Hoenig answers a Question of The Day