“I have to be in Bethpage at 4:00 pm for a meeting. I have somebody helping me market myself better” – Erik DeAngelis

Such is the brave new world for artist/illustrator Erik DeAngelis. Marketing was not always a consideration. As is the case with many burgeoning artists there is no clear path to figuring “it” out. Nonetheless, many are the frustrating twists and unusual turns that help sculpt an artist into who he or she will ultimately be.

As for Erik, he was born in Stratford, Connecticut and at two-years-old moved back to New York with his family.

Based on his propensity to live with a pencil in his hand, Erik was encouraged by his parents at a young age to explore the arts. As young as four, he took to drawing and had a natural gift for the drums.

So, even way back then, people knew left-handed, left-brained Erik had potential in the arts. 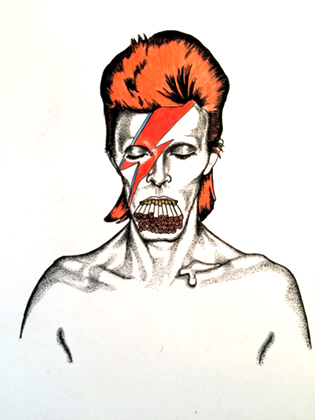 As the teenage years took hold, Erik fell in love with skateboarding and music. As his teenage years waned he busied himself playing drums in Long Island bands.

All along the way, Erik always loved drawing, but as is typical with young adults other things started to become more important. For Erik, it was friends, alcohol and girls that pulled him away from art. Despite a masters degree in art and a desire to pursue creative endeavors. The rigors of jobs in food service gave way to long nights, excessive drinking and sleeping during the day, and, before he knew it, the years sped by too fast.

Attempting to fit in, Erik even tried working in an office but felt more like a caged tiger than a reputable addition to the workforce. Stops and starts and occasionally touring with his band Heston Rifle kept Erik distracted and “busy”

Erik denied his true calling and instead chose to listen to the call of whiskey.  Seems it was easier to drink after work than to come home and draw. Blackouts and self-inflicted humiliation became regular occurrences. Alcohol, depression, and an attention disorder sent him into a decade+ tailspin of destruction and purposeless existence.

Ignoring the advice of concerned parties, as is the case with most addicts, there was no convincing Erik he had problems.

Then, about 5 years ago, Erik lost his job and saw another relationship deteriorate beyond repair.

When his son Sebastian was two-years-old, Erik was at risk of losing what was most important to him. That was when he began to realize that this lifestyle could not last and the “recreational activity” he engaged in was, in fact, a problem. Erik was left with a choice: Either get clean and sober, or lose what meant the most to him. For the first time in his life, Erik decided not to fight the advice of people that cared for him and decided to get help.

Thankfully, through a course of events, Erik eventually found out that he had been self-medicating depression a wicked case of ADHD with Irish Whisky and isolation. 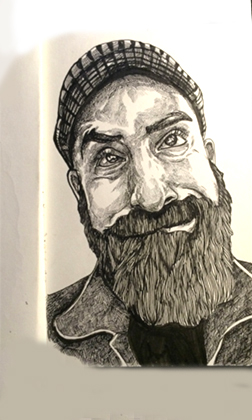 On December 21, 2012 Erik decided he would never pick up the bottle again. Immediately, he started receiving counsel from a grizzled Vietnam vet/former addict who devoted his life to helping others and called Erik out on his alcoholism.

As his transformation unfolded, Erik rediscovered his pens, his love for drafting, began doodling and, at first,  found an outlet in the labor intensive technique of stippling. For those who don’t know, stippling takes a great deal of focus and attention. For the first time in Erik’s life, there was plenty of both of these qualities to spare

In addition, he embarked on a strenuous fitness regimen, including obsessive running, cycling and swimming lost weight and got healthy, which eventually led to his competing in short triathlons.

But more importantly, Erik began to draw non-stop. Like a small child, he relearned his craft.

While Erik’s artwork always had a German Expressionist aesthetic to it, it became more realized. With each passing day, Erik grew more confident in his style and subject manner.

At one point, in an effort to express and chronicle his feelings, he dedicated himself to 100 self-portraits. To date, I’m still not sure if he ever finished (my guess is he has reached that milestone and then some) and neither is he, but, either way, Erik’s Instagram is filled with 100’s of eclectic drawings and musings.

As you flip through his social media, the mood feels stream-of-consciousness, but Erik’s course of consciousness is almost a piece of artwork in itself. Looking at it, takes one on a journey through a man’s creative psyche, where the observer gets to visit all the interesting and weird parts of his journey equally. Lunch bags, self portraits, anatomical illustrations, political cartoons, and visual puns. This quality creates and engrossing experience departing from the ADHD-oriented format of Instagram. 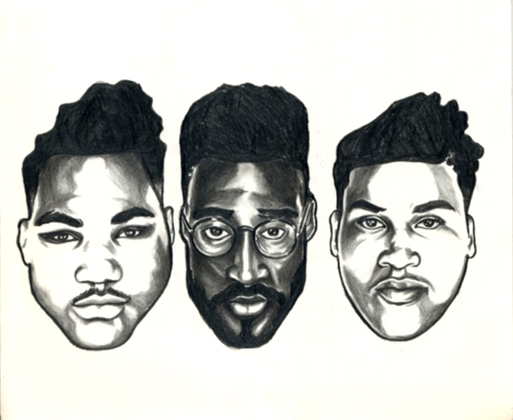 As part of his health transformation, besides alcohol, Erik also quit smoking. Still needing the kick that nicotine provides, the guy with the worn out running shoes and the pencil shavings on this floor started using E-Cigarettes.

As Erik realized the benefits of vaping as opposed to smoking, he did what comes naturally to him, he drew about vaping and started another Instagram to endorse the only method capable of helping him kick a 20 year smoking habit. The booming industry opened doors professionally and allowed him to organically grow an Instagram following of 11k followers, which created another platform for his quirky work.

Now, Erik is being asked to draw murals like the one he did at Money Cat Vapors and Electric Cloud Company, as well as being a sought after illustrator for marketing collateral, branding, and general creative advice within the art community.

In addition, Erik has designed merchandise for bands, been commissioned for portraits, and exhibited his work in numerous venues. His art has been added to collections from Oregon to Florence, Italy and faster and faster the momentum is continuing to grow.

Meanwhile, Erik still works in food service, but can take off a day here and there and it’s not the end of the world. As an artist, Erik is poised to have a great year and focused on reaping the harvest of rewards that his hard work has sown. Although, he still has a lot to learn about the “business,” learning and growing creatively now feels like a reachable goal.

Most importantly, starting with his son, his personal relationships are strong. 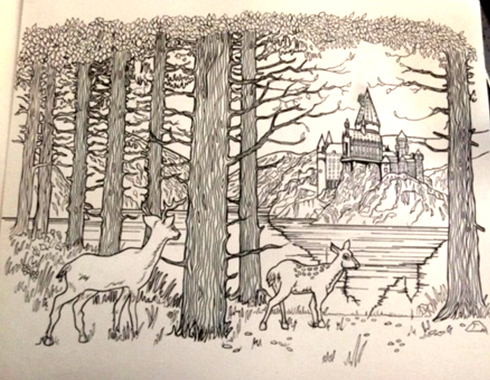 An attentive father, there’s not one person in the world more important to Erik than Sebastian. When not drawing, Erik is hanging – like 2 best friends – with his boy. In fact, after decorating Bash’s lunch bags every day for school, his lunch bag drawings have become somewhat of a cool “thing” to parents of school-aged children who see them.

Right now, in his life, Erik is dedicated solely to Sebastian and his career. Yet somehow he has managed to be both physically and emotionally available to his extended family, and although distanced from the bar scene, Erik still makes time for old friends.

The other day I was out driving with my brother-in-law and friend Erik and I commented on what a good mood he seemed to be in. Erik replied, “I love what I do!” Then he said, “It sounds corny but when I’m up in the morning, I just want to grab the day by the balls.”

“Carpe Diem” Erik! We are all excited to see what the future holds for you.