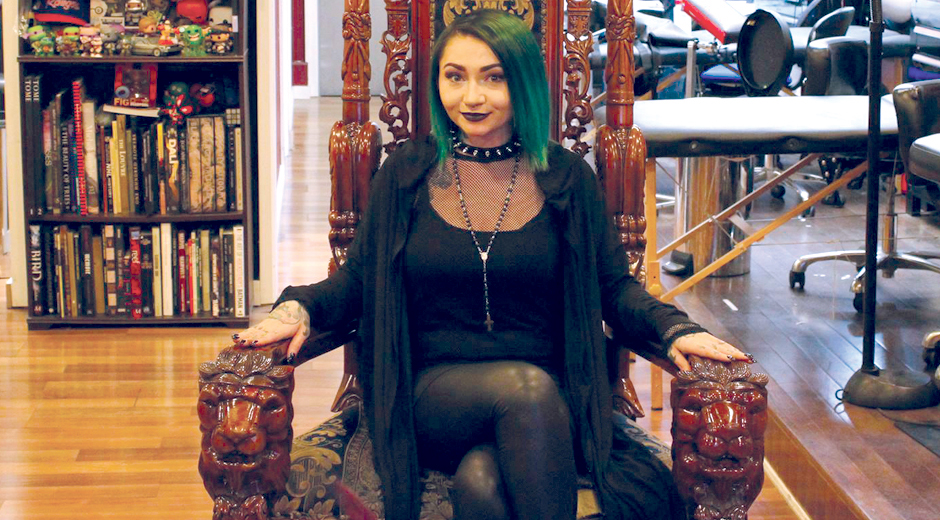 Courtney Raimondi is tattoo artist at Undead Ink in Oceanside NY. A relative new artist to scene, Courtney has quietly made a name for herself in the world of tattooing the right way. Not because she’s a girl but because she good at her job and works very hard. This award-winning artist isn’t satisfied and hungry to get better. Her tattoos are colorful and vibrant. Her lines are clean. She’s done guest spots all over the country. I had a chance to chat with Courtney and talk about tattoos, being a girl, and why you can’t be a cry-bay in this industry.

CENE: What was your first experience seeing or being around tattoos?
Courtney: As a child I actually hated tattoos and piercings until about high school. While in my senior year I got my first tattoo that I paid for with an art scholarship I received for college.

CENE: What made you decide to get into tattooing?
Courtney: I moved to NY from FL right out of high school with the dream of becoming a fashion designer. It was quite a struggle trying to survive off of retail jobs and also attend school so I needed to find something else to get me on my feet. My peers in college would look at my sketches and ask me if I ever considered tattooing until I eventually did. 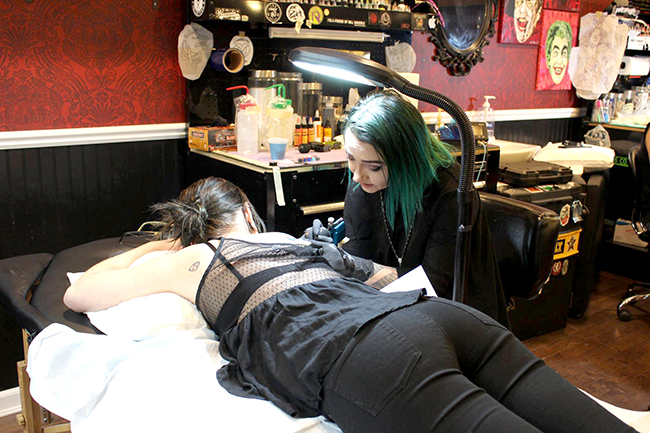 CENE: What was the first tattoo you did?
Courtney: The first tattoo I ever did was a star on my own ankle. In case you’re wondering, tattooing yourself is not fun, but I was told that if I couldn’t tattoo myself how could you tattoo a total stranger.

CENE What are your thoughts on the whole proliferation of the culture? The TV shows, etc?
Courtney: The growth of tattoo culture has its pros and cons like with anything else. The pro is that people who are not the typical tattoo clients now find it socially acceptable, even if all they are getting is an infinity symbol. The amount of tattoo shops that are opening up is making the market very saturated though. Now that television has cashed in on tattoo culture, people from all walks of life are opening shops. This includes people who know nothing about the industry or culture. I also find that the TV shows are sometimes misleading to the every day tattoo client. I often hear people referring to tattoo shows but they easily forget that reality television is the furthest thing from actual reality.

CENE: So many people try to get homemade tattoos. What experience do you having fixing all that crap?
Courtney: It’s illegal to tattoo from your home but in the end I blame the person getting the tattoo for trusting someone who they’re barely paying to sit in their kitchen. If that doesn’t seem slightly sketchy to you, then you deserve a crappy tattoo. I do a lot of rework and cover up work and it’s mostly from other artists at actual shops. Like I said before with the saturation of tattoo shops, there aren’t enough good artists to fill them with and that’s how I end up fixing all sorts of messes. I enjoy doing rework and cover up work though. I find that the client always gets more excited to fix something then when they just expect it to look great. 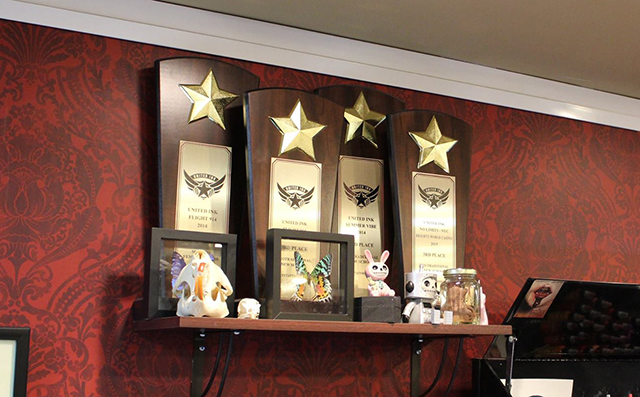 CENE: What advice would you give to someone looking to get into tattooing?
Courtney: Anything worth having is worth working for. If you’re looking for a job with instant gratification tattooing is probably not for you.

CENE: What advice would you give to people looking to get one?
Courtney: Research your artist! It’s so easy to look at people’s work now thanks to Instagram. Find an artist that fits the style you’re looking for! Also, you get what you pay for. Price should not be your first priority but instead quality. Be direct and clear about what you’re looking for in your tattoo. If an artist has a wait that usually means they are good.

CENE: Where do you see yourself in the next 10 years in the industry?
Courtney: In the next 10 years I know I’ll be tattooing monster high characters but besides that I hope to own a variety of businesses. I’m constantly working on my next move and the next few years I plan on traveling the world and becoming a better tattooer. I’m constantly transforming so anything is possible.

CENE: Anything else you want to say?
Courtney Just a quote that I think describes me well.
“I am a series of small victories and large defeats and I am as amazed as any other that I have gotten from there to here.” – Charles Bukowski